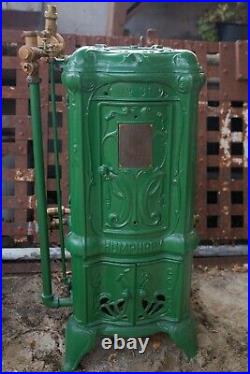 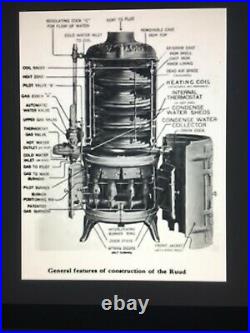 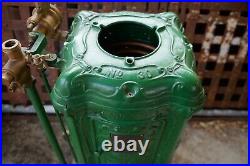 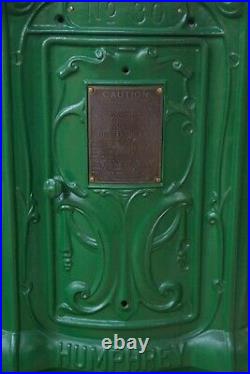 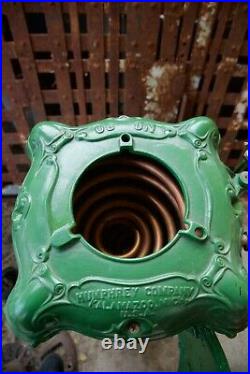 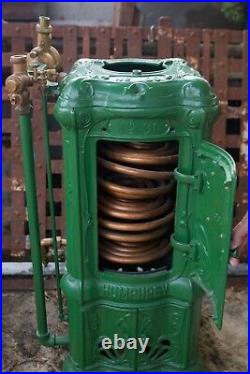 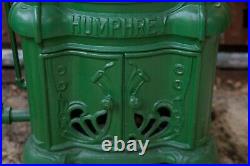 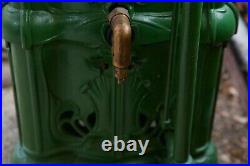 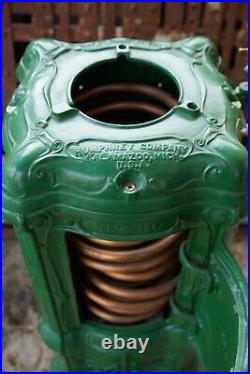 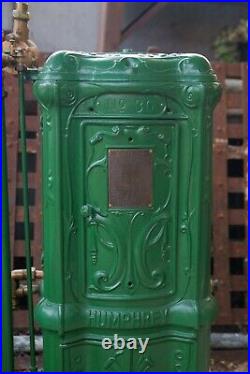 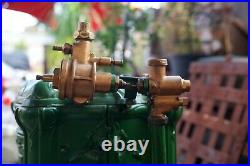 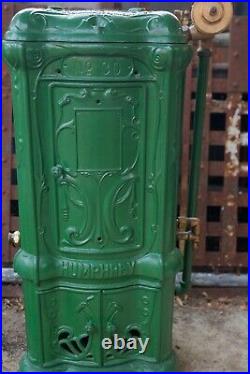 For sale is a gorgeous Historic & Rare Antique Humphrey Tankless Cast Iron Water Heater a Division or RUDD Kalamazoo, Michigan, U. Dating back to the early 1900s. This amazing water heater is fully restored with the original brass plate intact and was engineered to produce any amount of water on demand. This fantastic piece was also clearly designed to be the central focal point in any room as it is embellished throughout with an intricate design beautifully wrought into the metalwork. 30 Automatic Humphrey Water Heater also boasts ornate cast iron double top doors on both sides containing the large Architectural copper coil which has been painstakingly cleaned and polished to its original sheen and double bottom doors, again on both sides, which, when open, offer access to the burners under the coils which were designed to be easily removed. In addition to its beauty, this Antique Humphrey Cast Iron Water Heater was designed to be highly functional, lasting for decades as models have been found operating after 80 years or more. The piece measures approximately 38 tall (42-1/2 tall including the pipes); by 13-1/2 deep by 13-1/2 wide (18-1/2 wide including the side pipes). The heater would be the perfect Architectural piece in a historic home or a great movie prop and can be adapted to many uses from a base to display a museum quality sculpture, lamp, plant or table base or adorned with a large brass bowl filled with Objet d Art. About Antique Automatic Storage Water Heaters. Originally introduced by Edwin Ruud in 1889, the Automatic Storage Water Heater Hot running water on demand was a luxury unknown to even the most affluent Americans. Other breakthroughs, large and small, followed over the years, as Ruud became a leading pioneer in water heating products for the home as well as for commercial and industrial applications. By the time Ruud departed the scene, his breakthrough innovation had changed the daily hygienic habits of every living American. The heater provided easy access on both sides for cleaning the heating coils. Humphrey Automatic Gas Water Heater 1920 Ad. This black and white October 9, 1920 ad states an Ocean of Steaming water at your command. Think of an ocean of Piping hot water ready for you at the turn of the faucet. You may enjoy that convenience from the Humphrey Water Heater. About Edwin Ruud (9 June 1854 9 December 1932). He was the founder and President of Ruud Manufacturing Company, now a division of Rheem Manufacturing Company. Edwin Ruud was born in the parish of Askim in Østfold, Norway. He was educated in engineering at the Horten Technical School (Horten tekniske skole) in Vestfold, Norway. In the 1880s, Ruud began working for George Westinghouse at the in Pittsburgh, Pennsylvania. Eight years after filing his first US patent, Ruud filed the first of five patents he would assign to Westinghouse’s Fuel Gas and Manufacturing company. In 1889, Ruud engineered a design for an automatic storage tank-type gas water heater that used a bottom gas heater and temperature controlled gas-valve. He later patented the design in 1890. In October 1890, he expanded on his first water heater design, under the Fuel Gas and Manufacturing Company. On January 22, 1897, Ruud filed a patent separate from the Fuel Gas and Manufacturing Company for an Automatic Water Heater. His new design consisted of a cast iron shell, enclosing burners, heating surfaces (a coil of copper tubing through which water flows), and thermostat controlling gas-valves. The object of the design improvement was, to maintain the supply of water at the desired temperature at all times. With this new design, Ruud left the Fuel Gas and Manufacturing Company to start Ruud Manufacturing, his own engineering and manufacturing shop where he began to manufacture and popularize in home, as well as commercial and industrial water heaters. Ruud was issued his patent for the coiled tube Automatic Water Heater on September 6, 1898. A 1915 diagram showing the innards of a Ruud instantaneous water heater Ruud’s business expanded as he popularized and improved on his instant water heater design. By 1915, the Ruud Manufacturing Company had offices in Pittsburgh, Pennsylvania; Kalamazoo, Michigan; Toronto, Canada; and Hamburg, Germany. The Instantaneous Automatic Water Heater is a design that allows the user to instantaneously heat water for on demand applications while not heating, thus saving fuel, when not in use. Ruud died in 1932 and his widow, Minna Kaufmann Ruud died in 1953. The item “Historic Antique 1900s Ruud Humphrey Cast Iron Tankless Water Heater No. 30″ is in sale since Monday, October 5, 2020. This item is in the category “Antiques\Home & Hearth\Stoves”. The seller is “american-urban-relics” and is located in Reseda, California. This item can’t be shipped, the buyer must pick up the item.