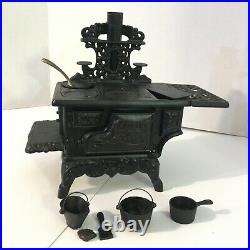 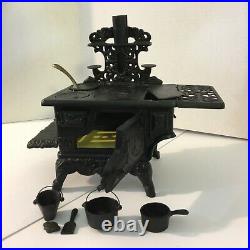 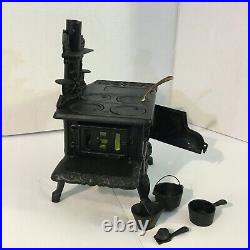 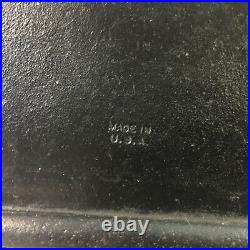 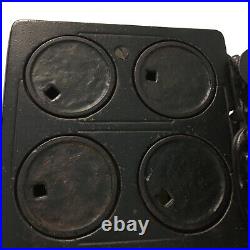 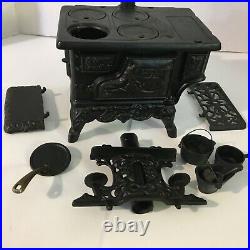 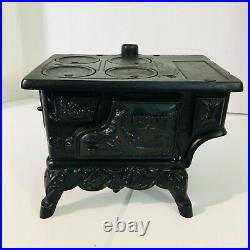 Crescent Salesman’s Complete Sample / Vintage Toy. 11″ high x 13″ wide. When cast-iron stoves were first manufactured in the late 19th Century, salesmen carried miniature models to demonstrate them as the actual stoves were too large and heavy. They were made to be quickly disassembled for transport by unscrewing five flathead screws that were set flush and almost invisible. The cast iron on these original models was the same as on an actual stove, and they were proudly stamped “Made in USA”. When salesmen no longer needed them, people gave the miniatures as toys for children. Manufacturers overseas mass produced them after WWII and took shortcuts. The flathead screws were discarded, the quality of the cast iron was grainy and rough — and they couldn’t say Made in USA. Later models were often painted or nickel-plated to make them more attractive as toys. The stove I’m offering is very old – seems to be an actual salesman’s demonstration model as opposed to the toy stoves later reproduced for mass sale. This stove was found in a yard sale in upstate New York in 1978. The owner said it had been played with as a toy for at least 3 generations that he knew of. He had no idea how old it was or where it came from. My friend bought it as a toy for his daughter; when she grew up he offered it to me as a present for my daughter. When my daughter outgrew it, it sat in the bookcase until my four year-old granddaughter noticed it. Please examine the photos carefully, and check out other stoves. Notice the flathead screws, the quality of the finish, and the “Made in USA” on the back. I’m not a professional, this is purely based on my research about the period. And of course, I’m very happy to answer any questions you might have. This item is in the category “Toys & Hobbies\Vintage & Antique Toys\Cast Iron”. The seller is “certaindipity” and is located in this country: US. This item can be shipped to United States.